I’ve wanted a small RV for a while – maybe since our Chaco Canyon camping trip a couple of years ago.  I want more security, more comfort than a tent offers.  But vehicle shopping is so complicated, there’s so much to learn.  So my looking had been a bit casual – I looked at a few in town, but they weren’t quite right.

Then a couple of Fridays ago I looked at Craigslist and saw a Toyota Dolphin in Show Low, Arizona.  Looked pretty good at $5300.  The owner had done a lot of remodeling.  I emailed it to my friend Sue – she’s very knowledgeable about RVs and especially the Dolphins.  Toyota Dolphins have a cult following – very popular.  Sue looked at the listing and said it looked good – did I want to go to Show Low tomorrow?  I could not have asked her, but she volunteered.

So Saturday morning we were off to Arizona – a 5 or 6 hour drive.  Plus stopping at every thrift store and yard sale.  And for a piece of pie in Pie Town.

The remodeled Toyota was horrible.  Curtains were raw pieces of cloth – no hems, not square, and then stapled to the wall.  The wallpaper was the same – jaggedly cut and stapled.  Stapled.  He was so proud of his work, but it would all have to be redone.  We checked out a couple more thrift stores and retired to the hotel.

I checked Craigslist again – as Sue said, we are in Arizona and they have lots of RVs.  I found a nice one – short (18’) and higher and more powerful.  Great layout.  And more money – $6200.  And in Sonoita, Arizona – almost to the Mexican border.  Sue’s response: Let’s go.  I learned a lot about the energy created by spontaneity.  I called the RV owner and made an appointment for Sunday about 1PM.

We set off before 7 AM and headed south towards Globe.  Salt River Canyon – what a wonderful surprise that was.  Just beautiful.  Have to go back some day.  Driving down the Mogollon Rim to lower elevations meant going into hotter weather.  Tucson in August. 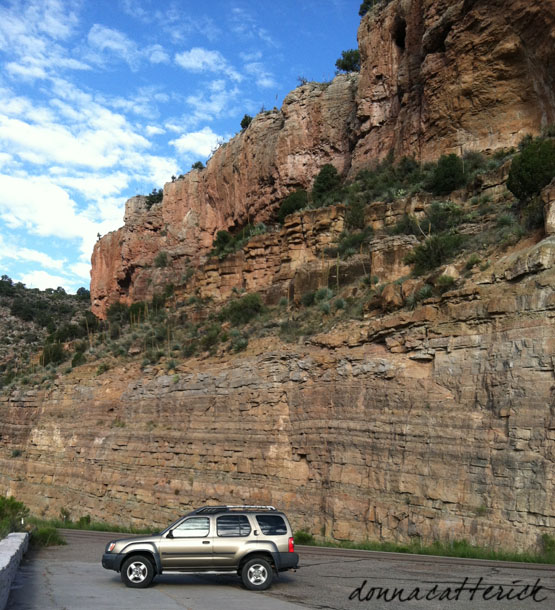 In Tucson we did some errands and looked at another Toyota Dolphin.  I bumped my head on the cab-over.  Twice.  It’s just too low for me.  In the cab I feel cramped driving.  This one too was a project.  Small projects I’d consider, but not total makeovers.  It’s going to be enough of a project to learn how to manage an RV.

On to Sonoita.  The RV we were going to see was a Jamboree on a Ford 350 chassis.  It’s almost the same layout as Sue’s Toyota – table in the back with a big window.  I like that.  It was super clean and had all the manuals and maintenance records.  We drove it.  It’s a V-8 so it’s got power.  I have to step up to the cab, so I can see in traffic well.  The cab has a lot of headroom – no chance of me hitting my head on the cab-over.  I was sure I wanted it.  Funny, if I just trust myself, I know what to do!  Still learning that at this age.  I offered the $5500 I had in cash and the owner happily accepted.

The owner is 88 – she bought this RV when she was 85 but found that she didn’t like to travel alone all that much.  She and her husband had traveled a lot in a big RV.  Mostly her kids wanted her to sell it.  I’m naming it Dorothy in her honor. 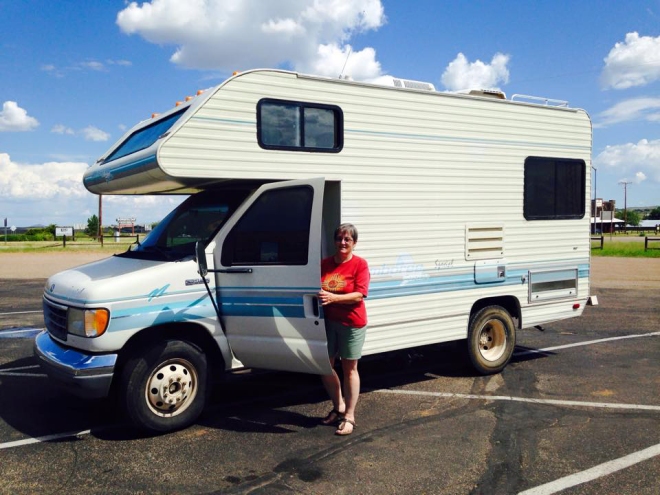 We were on the road by 2:30 hoping to get home that evening.  We drove east out of Sonoita and then north to Benson to get on I-10.  The rig was easy to drive.  The steering wheel cover was sticky – that was a slight annoyance.  And the rig is noisy – things need to be secured better.  And it was hot, no A/C, so I kept the window open – that added to the noise.

All was going fine; I found the light switch and the wipers – it was beginning to sprinkle.  Just before Wilcox there was a terrific bang – as if the bumper had come off.  Blow-out on the rear tire (dually).  Scary noise, but no real damage done.  Called AAA and they had it fixed by 6:30.

I learned about patience on this trip too.  It’s a requirement.  We are where we are, don’t fight it.  I am on I-10 with lots of big trucks in a vehicle I don’t know well, with no spare tire now, and it’s dark because a storm has moved in.  And I’ve been on the road since 7 AM.  Very tired and a little stressed.  The rain came with thunder and lightning.  All thoughts of getting home were gone.  Maybe we could get to Deming.  Coming into Lordsburg, I knew we would stay there.  No way I could go farther – truly exhausted.

On Monday morning we headed home.  It was cooler, I was rested – so much easier.  I took the RV right to my mechanic.  Those rear tires have to be replaced.  And maybe a bit of a tune-up.  This climate is very hard on hoses and belts.

I’m excited about getting it back, looking it over, and figuring out how to stock it.  And learn to manage the water lines, use the generator, and get ready for my first trip.