I like my trips to start on Sundays. I figure by the time I get there, the weekenders will be gone. But I left a lot till the last minute this time. I was overwhelmed with three trips to Las Cruces that week. The last one was on Friday and before I returned home the car’s ‘check engine’ light and the ABS light were on and I realized I had only one headlamp. I still needed the car for errands, so I didn’t want to take it to the mechanic on Friday. I was still sewing window covers for the RV on Friday afternoon. I got hung up on my own arbitrary schedule. Decided to give myself the weekend to

I made the window covers for the sleeping area out of a camping motif fabric. They need a few alterations, but work well.

prepare, take the car to the mechanic on Monday and leave in the RV after that. I can leave on a trip any day I like. Problem solved.

Monday morning, August 22nd, Cassie (the mutt) and I were on our way. My plan was to spend most of the time at Heron Lake in northern New Mexico. That’s too far for one day’s drive, so I planned to make a stop for a night or two at Cochiti Lake, just north of Albuquerque.

It feels good to drive the RV. Cassie settles in easily in the passenger seat. On the way up we were passed by a van with this slogan “Gleewood – Bringing mountain music to those in need.” Made me smile. I found out later they are a band from Ruidoso, New Mexico. Has to be a fun group.

I drove I-25 all the way to the exit for Cochiti – about 200 freeway miles. I had looked on Google Earth at the campgrounds and campsites available. I decided on the Tetilla National Recreation area on the east side of the lake rather than the State Park on the west. It looked a little more isolated and I was hoping that meant it was quieter. The campsites that looked best online were already taken, but I found a fine one near the overlook.

It’s easy now to set up the RV. I hooked up to the electric with my surge protector. And I covered the whole thing with a plastic bag. The cover to the plug didn’t stay on well and the surge protector seemed pretty exposed to rain and theft. I saw that someone covered theirs so I just copied. I turned on the propane, but I use it only for cooking and heating water. I leave the fridge on electric. I also leveled the RV, and then wondered if that was necessary since I wasn’t using the fridge on propane. It was good practice anyway.

I paid for two nights. It’s more expensive here than at the State Park ($10 v. $4 with passes) but it was worth it to me. Both places have electric and water hook-ups, dump station, toilets and showers.

Another part of the plan for this trip was to be more active on social media. I wouldn’t have wi-fi, but I could post from my iPhone. I had already scheduled the AlwaysBackroads blog posts, so I didn’t have to worry about those. I was doing a photo-a-day challenge for August and wanted to keep that up. I would take photos on the phone and upload to Instagram and Facebook. It did make me think about getting MiFi so I could download photos to the computer, play with them and then post to any of my blogs. I’m certainly not going to do a post of this length from my phone!

I had a great view to the west. The lake was not in sight – it’s down a cliff from here, but the Jemez mountains are beautiful. Just after I set things up, Cassie and I took a short walk – we both need it after several hours driving. We went to the overlook and then found a trail along the edge of the cliff. We had a good view of the the Rio Grande coming into the lake. It’s been raining a lot lately and the river was much muddier than the lake.

I set up my reclining chair (Costco) outside. It rained a little, but the chair doesn’t stay wet, so I didn’t worry about sheltering it. I sat outside with my water, this journal, a book, my phone and my camera. Everything I need. I take photos for immediate online use with the phone, but the 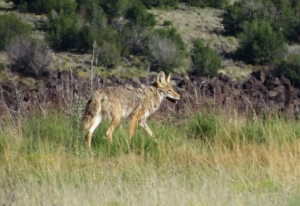 camera has a great zoom lens for much better shots. I am getting better with the phone camera, at least I’m remembering to use it more often. When it’s too warm, I move inside. Even had the air conditioning on a few times. When the clouds return, I move back out. About 10AM one morning a coyote wandered nearby.

The first book I started reading was “So Long Marianne” by Kim Hesthamer. It’s the story of Marianne Ihlen, Leonard Cohen’s inspiration for many songs. I wanted to know more about her than just his song. She died a few weeks ago. Cohen had written her a letter when he heard she was dying. It’s one of the most touching notes I’ve read.

“…well Marianne it’s come to this time when we are really so old and our bodies are falling apart and I think I will follow you very soon. Know that I am so close behind you that if you stretch out your hand, I think you can reach mine. And you know that I’ve always loved you for your beauty and your wisdom, but I don’t need to say anything more about that because you know all about that. But now, I just want to wish you a very good journey. Goodbye old friend. Endless love, see you down the road.”

I think that would be comforting to a person near death.

I liked the book, but it made me sad. She was about 10 years older than me, but her struggles to find her passion, to find herself, were familiar. And I fear are still being repeated by young women today.

Early Tuesday morning we walked down the boat ramp road to the lake. Really steep. I imagined trucks and boat trailers coasting into the lake.  There was an area with a locked gate, but I figured I’d ask the camp host if it’s okay to walk there. I wasn’t sure what is Federal land and what belongs to the Pueblo.

Back in the RV I listened to a J. K. Rowling podcast about failure. On my phone – very nice to be able to do that. Rowling is one of my heroes. She had a vision for herself that survived not only poverty, but also great wealth and fame. She’s the definition of ‘grounded.’

That day (August 23rd) was the first anniversary of my having this RV. I should write to Dorothy, who sold it to me, to let her know how much I enjoy it. She was 88 then and her kids didn’t want her go go camping by herself. Sad that she didn’t sell it of her own accord. I was glad to be out in it on this anniversary. Thanks Dorothy.

I finished the day watching the PBS show “Boys of ’36” about the Olympic rowing team. It’s a treat to be able to watch these programs here. I rarely take time at home for them.

On Wednesday I finally met my neighbor three spaces down – my only neighbor on this loop in the campground. She’s Elke, an older German woman. She was here for the full 14 days allowed. And then she will head to another campground. She has a house in Santa Fe, but is tired of city life. She will probably come down to Elephant Butte someday.

The morning walk took Cassie and me to the clump of cottonwoods down the road from the boat ramp. This is a day-use only area. We had it to ourselves because we went before the gate was unlocked. Near the shore there were about six or seven beavers in the water. I didn’t know beavers lived in lakes. They swam back and forth in front of me occasionally slapping their tails on the surface and diving.

I took a lot of photos. Not great – the sun wasn’t up here yet. In the viewfinder I had a clear view of the tail as it raised and smacked the water. In all the photos, I got only the splash. They didn’t give me any indication that I could see to hint that the action was coming. The camera and I were too slow. 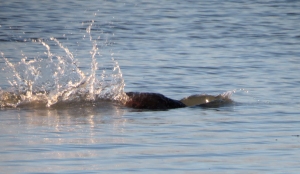 The days fell into a similar rhythm. A cup of tea. A walk down the boat ramp road before the day warmed up too much. Past the locked gate I could let Cassie off the leash which we both appreciate. She never found anything to chase, but lots of things to smell. The rest of the day is read, write, take photos, and watch the sky and mountains and birds. Mix and repeat. Move inside when it rains (never hard); move outside when it quits. Take another walk.

I was enjoying this routine. And the thought of packing up the next day and heading north just didn’t appeal to me. I paid for two more nights. The travel days are more taxing.
To be continued…