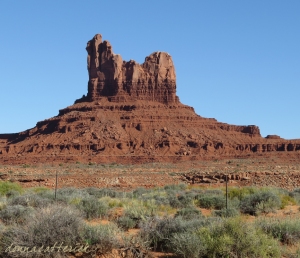 It was a leisurely drive of 85 miles from Navajo National Monument through Monument Valley, with a quick stop at Mexican Hat, to the campsite at Goosenecks State Park, Utah. Monument Valley is spectacular, but then formations like those can be found all over this part of Arizona. I stopped often on pull-outs to take photos. 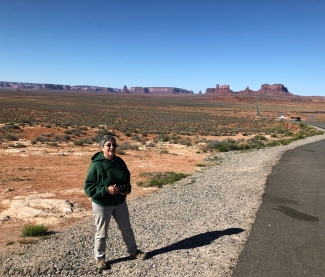 Another photographer and I were leap-frogging, and taking photos at the same places. We finally got to talk. He and his wife are from Switzerland and this is their third trip to the U.S. They’ve seen more of this country than most Americans. We took photos of each other at the ‘Forrest Gump’ section of the highway (remember the scene where Forrest is running and decides to stop).

I stopped at Mexican Hat, but it’s not a place I wanted to camp as I originally thought. It was very dusty. Worth seeing, but that’s it.

Of course, I wasn’t sure about Goosenecks either. I paid for one night there ($10). It’s hot, no trees, no shelter (a few sites have a metal shelter, but not mine). I parked right on the edge with a incredible view to the San Juan River 1000’ below. Decided to stay a few more nights. I wanted to see the light on the canyons at different times of day and different weather.

View from my RV window.

The Connecticut couple came by – I finally know them as Denise and Scott. They had been at Monument Valley for a few days – hook-ups there. They came here because I had mentioned it as my next stop. Another part of that shifting community of campers. 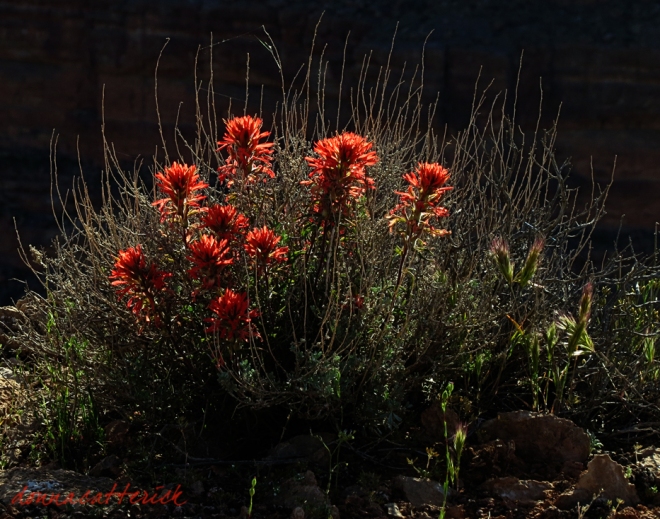 Cassie and I walked to the point. You can camp out there, but the road was too rough for me. Nice walk though.

View from the point back towards the RV.

My mornings here: sitting on a rock at the canyon edge with my cup of tea and Cassie on her lead, watching the sunrise. The last-quarter moon reflected on the riffles in the San Juan River a thousand feet below. Monument Valley can be seen from here and the first rays of the sun hit there. Light changes all the shapes. Nothing lasts. Except geology. If we destroy life on earth, the rocks will remain. 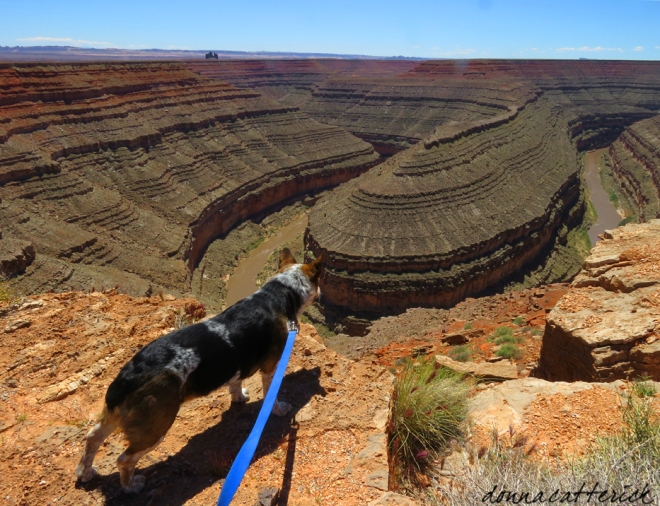 It was time to move towards Hovenweep National Monument. The drive was beautiful. I’m fascinated by Comb Ridge and want to return to explore it someday. Did not take even one photo of it.  I stopped in Bluff for a few supplies. I had miscalculated how much canned dog food we would need. This is a critical supply. I bought two more cans to get us home. And I bought ice, the first I’d had since the first day. That is some record. I do like my iced tea.

I took the Bluff/Blanding road north and then turned east towards Hovenweep. Terribly pot-holed road and when it was gravel, it was washboarded. Turns out I should have taken the road from Aneth – it’s a good one! Possibly should have asked in Bluff and not relied on my old map. 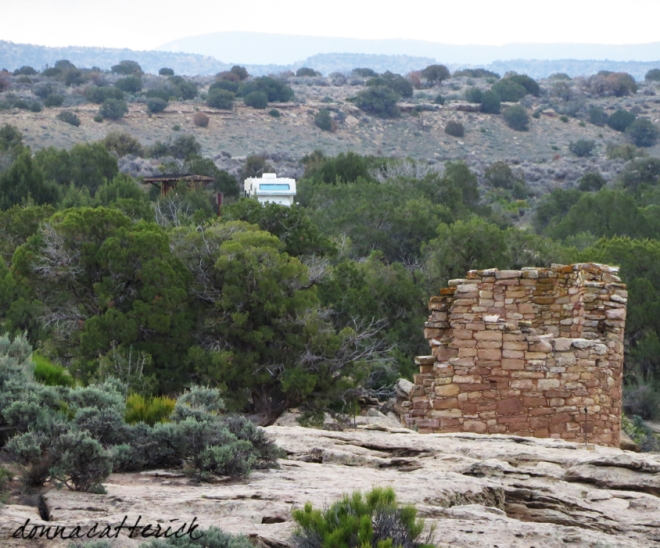 My RV from the Tower Ruins trail.

The Hovenweep campground is pretty, but there are few RV sites, most are for tents. I was lucky to find the last level site that was not parallel-parking on the road.

I walked to the visitors’ center. Bought a book on local geology. I’ve bought at least one book at each place that offered them. I’m reading the one I got at Navajo National Monument, “I’ll Go and Do More,” by Carolyn Niethammer, a biography of Annie Dodge Wauneka. It’s an excellent introduction to a Navajo woman I hadn’t heard of.

There are two trails here – dogs welcome on both! The Tower Ruins trail is near the visitors’ center. It’s a two mile loop with many ruins. We went early one morning and saw no one else on the the way. 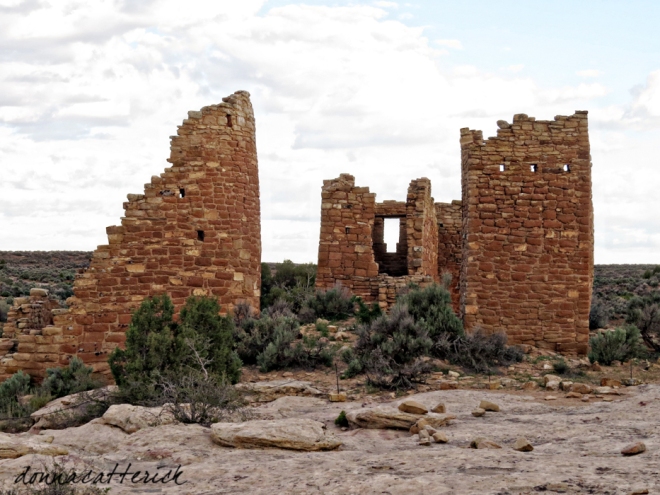 The other, Holly Trail, is four miles one way. We walked a short way on it, but an 8-mile hike is beyond my abilities now. Unless I wanted to take all day.

Part of the Holly Trail – very narrow crack in the rock.

Talked with a friend who has a cabin near El Morro (New Mexico). She wants to meet there for dinner a few nights from now. It sounded good. El Morro RV Park has hook-ups and strong, hot showers. I’m ready for both. And the Ancient Way Cafe is excellent. Yep, time to start towards home.