I was 16 or 17 returning to California on a Greyhound bus after visiting relatives in the Midwest.  As happens on long bus trips, my seat-mate and I got to talking.  This time it was Ivan Day from New Zealand.  The important part of that chat was that he suggested I write to a family friend of his.  Jacqui Knight was a few years younger than me, but we shared a love of animals, especially horses.  Thanks to Ivan, Jacqui and I became pen-pals.  And pen-pals were all the rage then.

Jacqui with my Mom 1973, Lakeside, California

We wrote frequently for a couple of years, exchanging letters, cards, and small gifts.  Some years the letters tapered off, then began again.  She visited the States in the 1970s. I was living in Swaziland then, so she met my parents, but not me.  We had never met until this week.

Social media has made it so much easier to keep in touch and to make quick arrangements.  Snail mail was quite slow.  She visited the west coast earlier this year – I almost flew to LA for a lunch with her.  She suggested waiting until May when she would be back for various conferences and events.  She is the butterfly advocate in New Zealand and founded Moths and Butterflies of NZ Trust.

She planned to be in Lawrence, Kansas for Monarch Watch’s Spring Open House.  I decided to take a road trip to meet her. 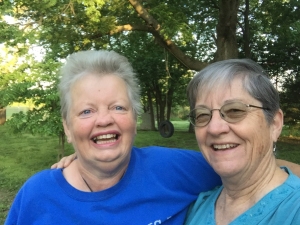 We stayed at a delightful bed and breakfast – Cedar Acres Farm near Oskaloosa, Kansas, for three nights.  We had time to talk, visit Lawrence and Monarch Watch, talk more and more.  We had some catching-up to do do.  There were a few gaps and for me a few memory lapses.  It was amazing.  We hadn’t met before, but we have known each other for over 50 years.  Definitely not strangers.  But I did learn some things about Jacqui.

She can keep up a frantic pace – very energetic, gets a lot accomplished, and keeps up with a huge network of friends and colleagues.  I need a day off every once in a while – even on a road trip.  She doesn’t – she thrives on this life.

She’s very tech savvy.  On this trip as I drop off social media, she seeks it.  The American car, the GPS on her smart phone, and her computer – along with everyone’s version of wi-fi:  none of it fazes her.

She’s very knowledgeable about butterflies, not just Monarchs.  She knows the habitats and ecology as well.

I’ve always known she was adventurous.  About 20 years ago she rode her horse from one end of New Zealand to the other.  You can read about it here.  I learned she’s still adventurous and interested in what’s around her – water tanks or children’s games.  She tackled her own road trip here – a couple of thousand miles.  No fear.  Which leads to the next discovery.  She’s an excellent driver.  And brave.  My proof:  she drove in Mexico City.  Enough said.

She still watches horses.  Maybe that never changes for us horse-crazy girls.

She’s very easy to be around.  This definitely felt like an old comfortable friendship.

I didn’t want our time together to end.  It was hard to watch her drive away from our one meeting in fifty some years.